This apparatus, was well known in the early decades of the past century. It is, in my opinion, curious that a BBC label is shown on it, which says: Type Approved by Post Master General (just visible on the second photograph). This might indicate, that this device could have been used in the early 1920s. 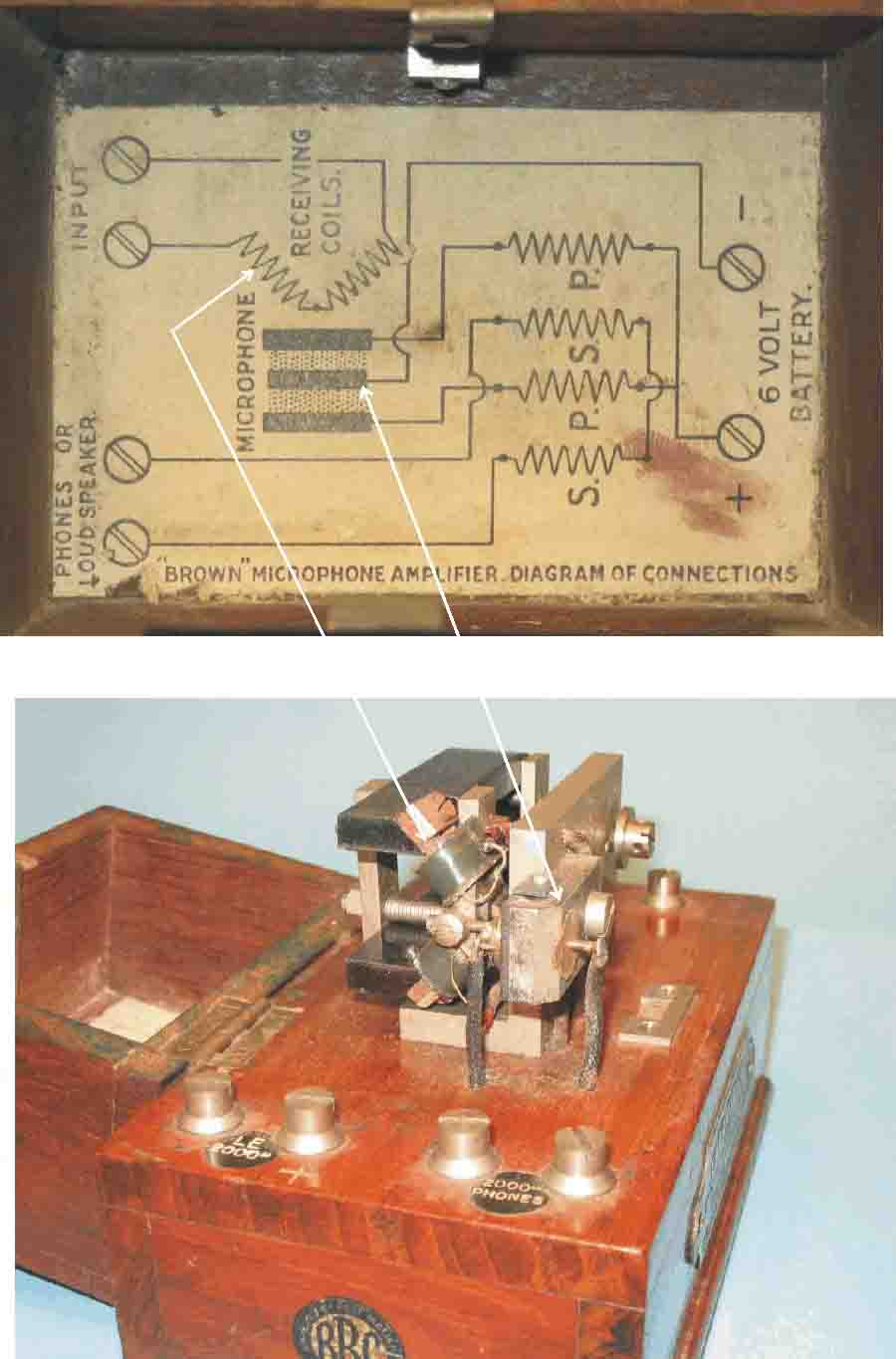 They specifically designed it for earphone impedances (2000 ohms), whereas telephone lines employed 600 ohms or that like. Whether it had to amplify crystal detector signals or regular early radio broadcast signals, is not known to me. Interesting is, that the microphone's DC bias is passing through both primary, push-pull, windings, and could prevent (thus cancelling) saturation of the transformer core, whereas the audio signal was being transferred freely onto the output of this amplifier unit. 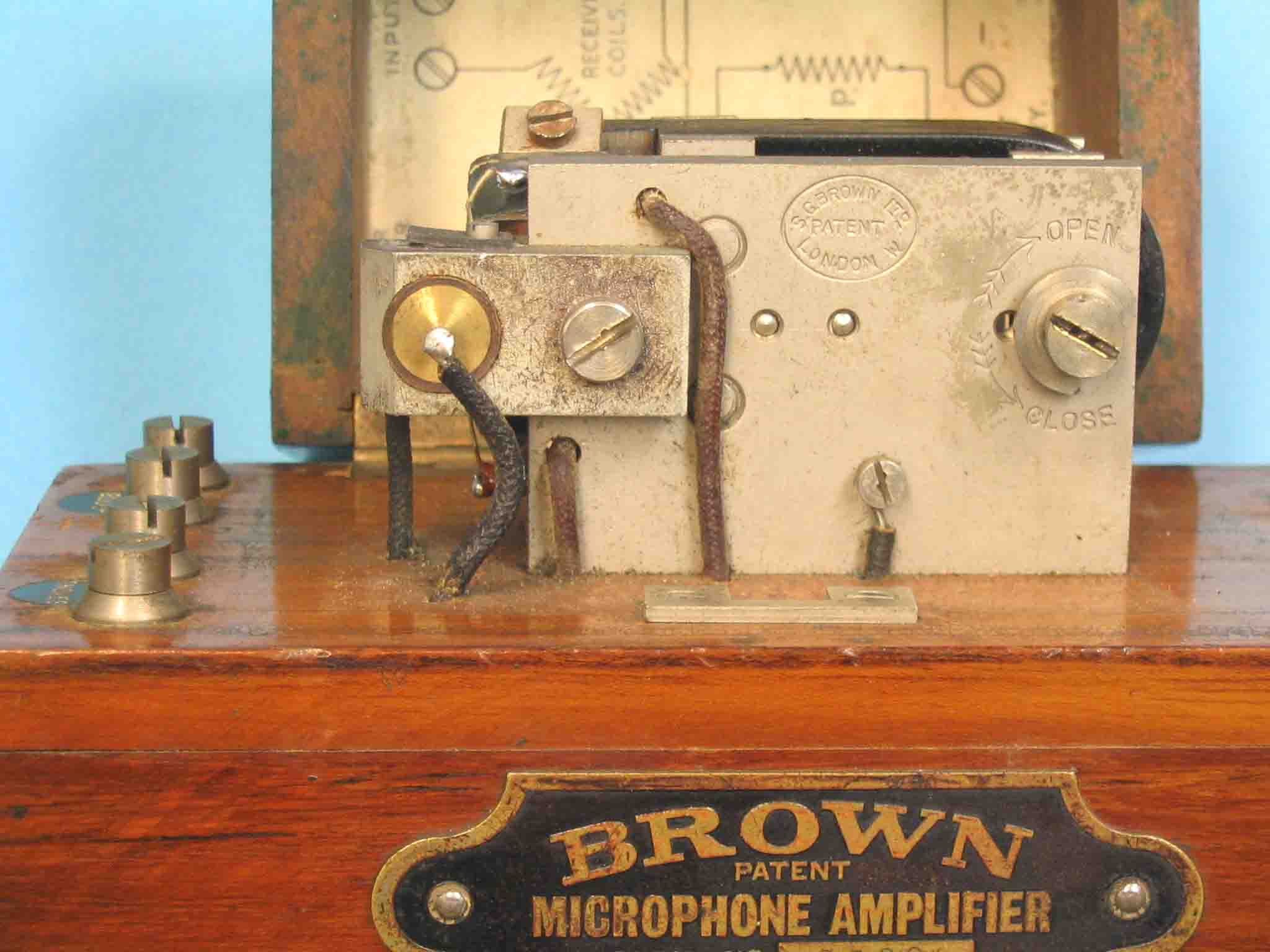 The wire on the left-hand-side, is connected onto one side of the (push-pull) carbon vibration-microphone system.

1. Shortly after this page was put on the web, David Read has sent me his interesting comments:

The reason for the BBC stamp is simple and quite interesting.
In the days after WW1 and before public broadcasting in the UK, radio amateurs were able to pass an exam and get a licence to transmit and receive on the basis of limited power and government allocated wavelengths.
When the public broadcasting was eventually allowed in 1922 (after a great deal of pressure from distinguished scientists, electrical engineers, and radio amateurs) , this also required approval from the Postmaster General to ensure, for instance, that interference from domestic apparatus would not disturb government, military and post office communications by radio. Whilst the main requirement was that reaction (positive feedback) was not allowed in valve receivers because of radiation from the antenna, all equipment (even passive equipment such as crystal sets and horn 'speakers) had to be submitted to the PMG for examination and approval before it could be manufactured and sold to the public. The proof of this examination and approval was PMG type approval stamp with BBC in its centre.
By 1924 these regulations were seen to be a nonsense and the requirements fell into disuse.
The BBC stamp, however, continued in use for a few years more as a mark of prestige but without the words "type approved by PMG".

S. G. Brown in selling his carbon amplifier to the public after broadcasting began in 1922 was exploiting the new market opening up for domestic radio apparatus. In fact he had already been making such devices for the telephone industry for many years. Apart from making the amplifier as a device on its own, he also made it integral with a horn loudspeaker and also a crystal set.

I've had one of these microphone amplifiers for many years. It was intended to be added to a crystal receiver for operating a horn loudspeaker.

The company S G Brown Ltd was formed in 1910 at a small workshop in Houndsditch by Mr Sidney George Brown FRS for the manufacture of the type 'A' reed headphone which became famous throughout the world. The company also manufactured a cable relay, both products being the inventions of S G Brown. With increasing demand for these products the company expanded making it necessary to move to larger premises in North Acton in 1915. Many thousands of the type A headphones were being manufactured for use during WW1.With the advent of radio broadcasting the company manufactured crystal receivers and, later, valve receivers. The company also manufactured horn loudspeakers and expanded greatly into the manufacture of various types of headphones. The company also produced moving coil loudspeakers, hearing aids and sound-on-disc recordings for talking pictures. Further expansion of the company led to moves first to North Watford and then the West Watford. My own company, Racal Electronics PLC, acquired S G Brown Ltd in the early 1980s and continued making various headphones and microphones, mainly for military radios.