Swiss nomenclature: M1K
This magnificent transmitter was designed in 1942/43 and produced by Telefunken. However, the Germans themselves purchased only a few sets. (these units might have been only employed by Goering's staff-communication group)

The Swiss Army purchased these transmitters about 1944/45. Assemblage took place by the Swiss Autophon company. 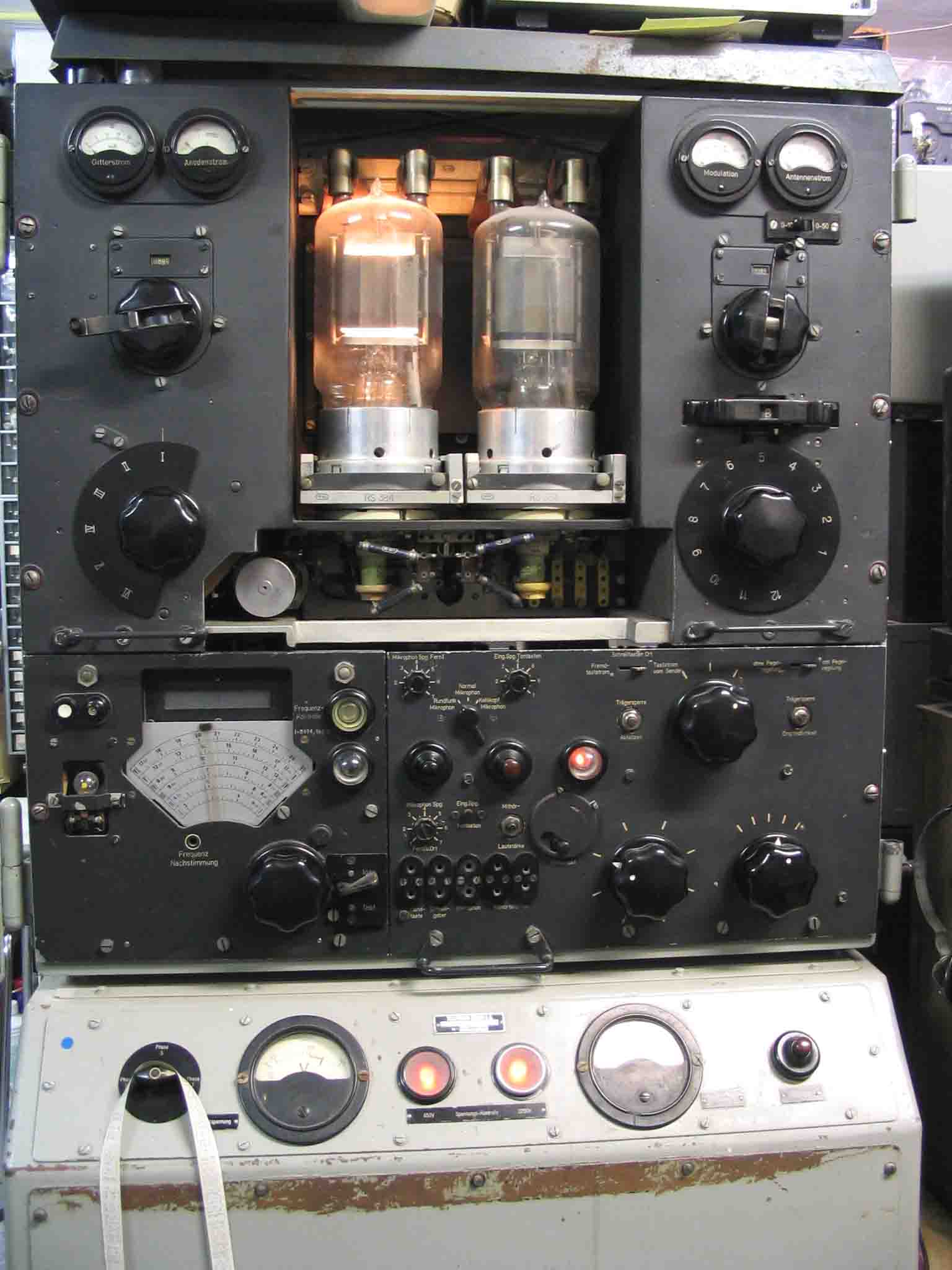 Front panel, with door being opened.

The filament of the big transmitter valve RS384, on the right-hand side, has been disconnected, to limit the antenna power to maximally 700 watts. 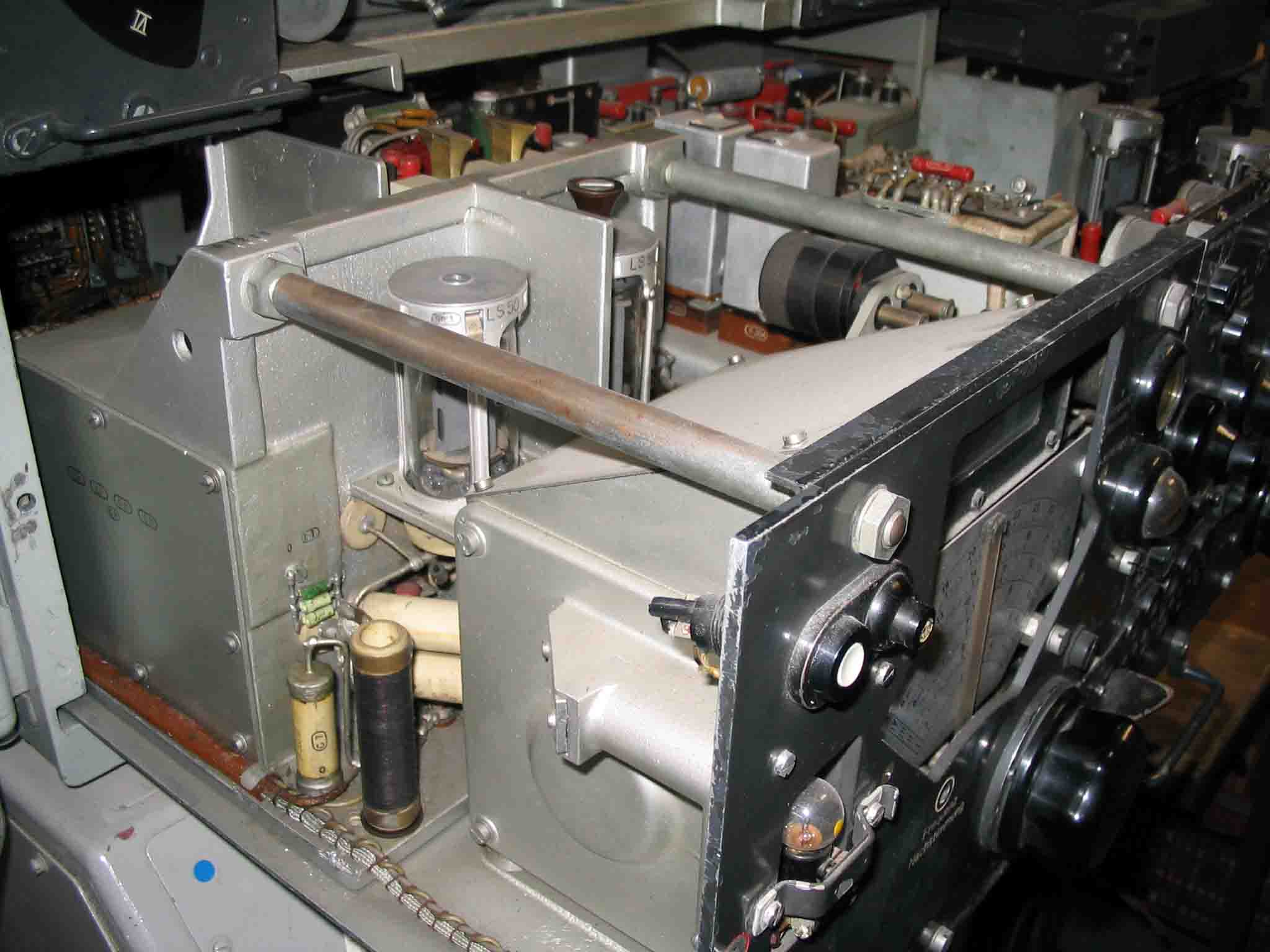 The driver and modulator cabinet has been pulled out of the main-frame. Disconnecting the mechanical link between the band-switch and frequency tuning.

The valve (tube) on the left-hand side is Rö 1 the power oscillator valve. This transmitter could be tuned between 3 and 25 MHz. Max. antenna power 1400 watts.

Very remarkable was, that according the specifications the frequency stability was better than 5 ppm/K. If we consider that they employed power valves (anode dissipation of 50 watts), then very special circuitry had to be maintained. Let us consider the oscillator circuit shown below.

They achieved a remarkable increase in frequency stability, by lowering the influence of the anode versus the oscillator coil. Consequently, increasing the effective Q of it. As we know, that the transmission was blocked (keyed) by means of grid-blocking of the oscillator stage, then we understand that the LS50 oscillator valve changed it dissipation constantly. When we consider that the temperature of a valve anode is changing, then we may expect that its capacitance Cak has to change as well. Consequently, changing the signal frequency. However, when the Cak is parallel to the configuration of C 11 (200 pF) and in series with C 10 (100 pF) then we may regard that the nominal influence of Δ Cak is being reduced. For this occasion we have neglected the Miller-effect. Most capacitors in this circuit are hermetically sealed-off from their environment. Inside it contained two cylindrical (coaxial) capacitors of different Tc, as to minimize the overall frequency / temperature response. These kinds of special capacitors were manufactured by Hescho and were supplied with tolerances of 0.5 %, and are visible in the picture above. See the two horizontally mounted porcelain tubes just behind the vertically mounted wire-wound RF choke.(left-hand side)

The frequency fine reading is projected on a frosted glass window.

The transmitter is tuned at 3577.7 kHz, which calibration today still is within its specs (after > 62 years)! 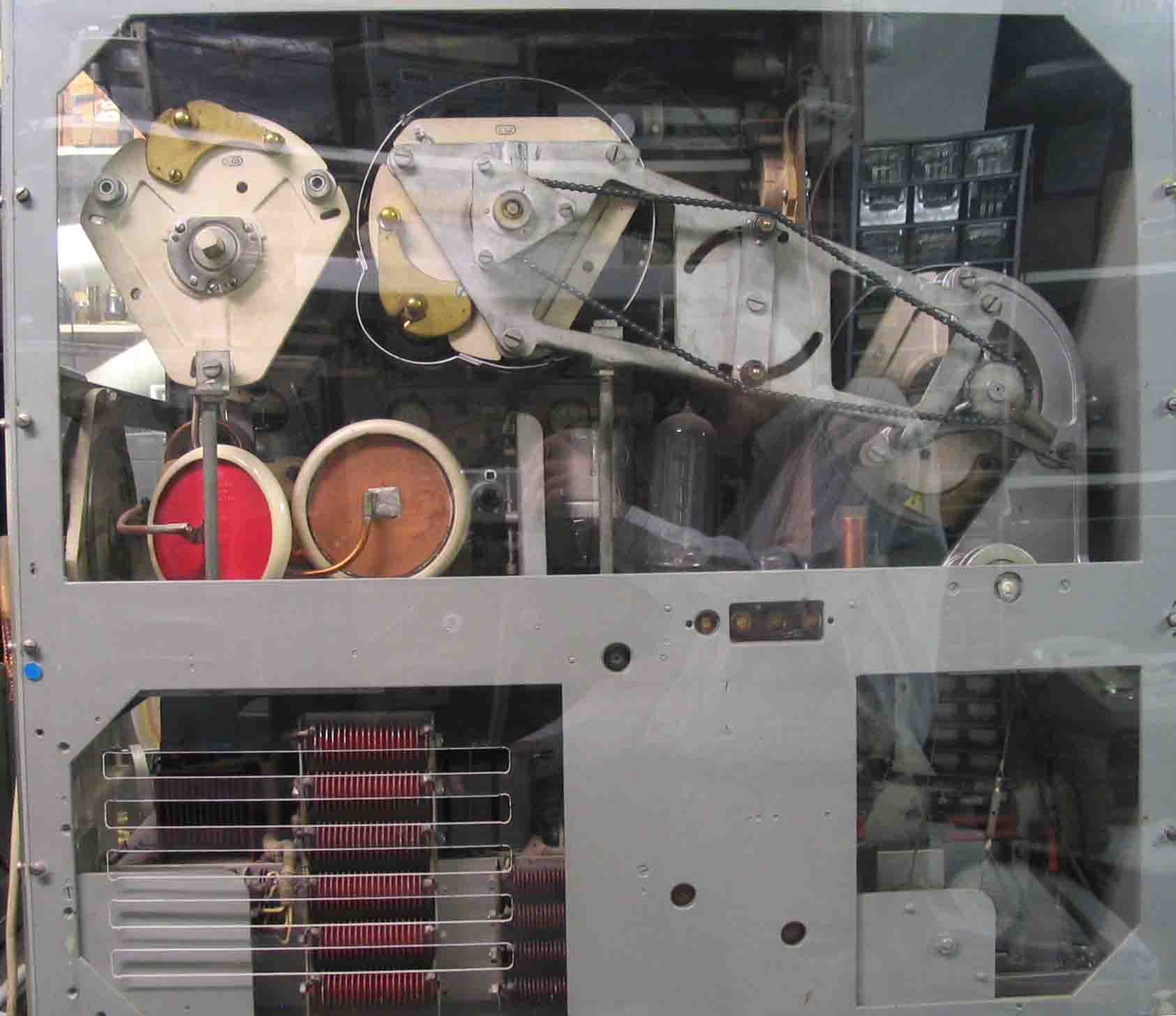 A view of the backside of the transmitter.
The metal cover plate being removed, and is replaced by a perspex safety window